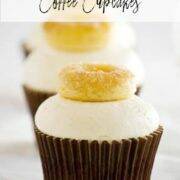 I’m re-sharing an old but favourite recipe from June 2014 for my Cinnamon Doughnut and Coffee Cupcakes with an updated recipe and some handy hints, including the best cupcake hack ever! You can read the original post below…

Two of my favourite things combined – doughnuts and coffee! Moist and fluffy coffee cupcakes topped with a classic cream cheese frosting and a mini cinnamon doughnut. They’re just meant to be together!

I missed it! I flipping well missed an awesome day to celebrate sugary erm… goodness! I had this all lined up to edit and post, then I went and got side-tracked (read escaped to Cornwall) and forgot all about International Doughnut Day! In the words of the number 1 doughnut fan, Mr H J Simpson. Doh!! So my most humble apologies and I hope you like these coffee cake cupcakes.

Let’s just sidetrack for one moment though, and let’s dwell on Cornwall, or more precisely the food! We ate (and drank) our way around some fabulous places over the week we were there, from The Two Clomes, in Quintrell Downs, to the fantastic Paul Ainsworth’s No 6 in Padstow, rounding off with battling the Doc Martin tourists in Port Issac to visit Nathan Outlaw’s Fish Kitchen, all filled in with some great hospitality of our wonderful friends, who we were staying with. They will all be making an appearance here shortly.

Now back to the doughnuts…

I fell in love with my mini doughnut mould from Lakeland way back last year; and for someone that really isn’t a silicone bakeware fan that’s saying something.

Since I started using the mould, I’ve tried lots of different takes on my original doughnuts. Some attempts were perfectly disastrous, others were just a bit too ‘ordinary’ for to posting up here; but with each attempt I’ve been formulating more ideas in my head, including these baked cinnamon sugar doughnuts.

It was the smell of fresh baked sugar doughnuts walking through Cheltenham town centre during half-term that sent my senses into overdrive. Then the arrival of the annual fair in the village brought that smell flooding back to me, and so the doughnuts were put to the test.

If you’ve been reading Crumbs and Corkscrews for a while, by now you should have a good idea of how my baking and creating head works, and just a doughnut isn’t going to suffice.

I had a little cream cheese frosting leftover from some other baking and thought that the doughnuts would actually make the perfect sized cupcake topper. And of course, there really is only one perfect baked good combo… a doughnut, coffee and cupcake!

So then, the doughnuts… I like to think that actually they are sort of healthy. If you take the cupcake away that is! They are baked; so no deep-fat frying and greasiness. Just a nice fluffy doughnut without to many extra naughty calories; well that’s if you leave them ‘naked’.

Taking my inspiration from fairground doughnuts, I gave these a generous dipping in some nice and spicy cinnamon sugar; helped to stick to the doughnuts with a little brush of melted butter (oops, that will be those extra calories appearing again; just keep reminding yourself ‘they’re baked, they’re healthy(ish)).

How do you top your doughnuts?

I know not everyone’s a fan of cinnamon, I never used to be, but as my adult palate has become a little more discerning, it’s a flavour I actually quite enjoy. But if you still aren’t a fan, you could always swap the cinnamon sugar for either just regular granulated sugar, maybe a vanilla sugar or how about something a little different and go for lavender sugar.

These are good enough to eat on their own, you really don’t need to go down the whole cupcake route. I think they are best eaten when they are a little warm and the butter is still melting combining with the sugar; the cinnamon flavour really comes out. Although, if you want to add the cupcakes…

The coffee cupcakes were incidental really; as I said I couldn’t just make the doughnuts, and I thought that the cream cheese frosting would be the perfect match for the cinnamon.

I think the doughnuts are the ideal size for topping off a cupcake, and just imagine how cute a little sprinkled doughnut would look on a cupcake for a children’s birthday party or just as a treat! As these were destined for adults (they’re just like big kids really), I went with a coffee cupcake.

Coffee cake is a ‘Marmite’ affair, you either love it or hate it. But I really wanted coffee to go with these little beauties, so instead of the usual shot of strong fresh espresso that I add to my cupcake batter, I used only half; to give a hint of coffee. Just enough to get the taste but not enough for those in the ‘hate it’ camp to shake their head and say ‘no thanks’.

The best cupcake hack ever!

If you’re ready to take on some other cupcake treats, then why not check out these favourites… 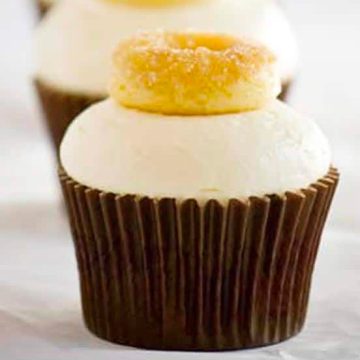