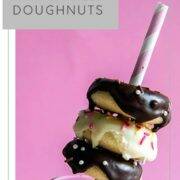 How cute are these mini vanilla doughnuts? Quick, easy, and baked so there’s no proving needed! Dipped in vanilla and chocolate glaze, they are the perfect mouthful of fluffy doughnut.

I can’t walk past a bake or cookware shop without buying something. The more unusual the better, and if it’s shiny, it’s in my shopping basket quicker than you can say ‘do you really need it?’.

To be honest, there’s really no point asking me that because it will always be ‘Yes’ and if you ask me ‘why?’ I’ll be able to find an excuse…

It was in the sale…

It was an introductory offer…

So when I was waiting to meet a friend, in Cheltenham Lakeland, as you do, it was the pretty array of silicone bakeware that caught my eye.

I’m not a huge fan of silicone, I just don’t get one with it, but it was the mini doughnut mould that took my fancy. I’m a sucker for mini food, I suppose I don’t feel as guilty when I eat a mini doughnut, rather than a full-sized Krispy Kreme.

Alas, the downside is that they go down too quickly and I probably end up eating more of them, than if I’d eaten a full-sized one… oops!

And just quickly, is it doughnut or donut?

Obviously we’re working with mould here, so these little ring beauties aren’t a traditional fried doughnut (that would be really fatal on my WW diet); they’re a baked doughnut, so they’re pretty quick to bake and decorate; all be it a little fiddly.

I haven’t made doughnuts before; I’ve used to bake a doughnut muffin for the shop based on a BBC Good Food recipe. I wasn’t sure if this would really work for the mini doughnuts, so I got my head stuck into doughnut research (don’t do this on an empty stomach, sugar cravings kick in quite quickly).

In the end I hit upon a recipe on the Lakeland website. Handy that when you’re buying the mould from them!

As I made up the recipe it seemed rather gloppy, and the first batch out of the oven I found rubbery. Ian contests that they tasted like a doughnut, but I wasn’t convinced.

So I crossed the second batch with the doughnut muffin recipe and added natural yoghurt in place of the oil.

As if you hadn’t noticed these are mini doughnuts, so you’re not going to get big, airy doughnuts, but you are going to get the perfect bite-size, sweet and healthier baked doughnut.

I love that these mini vanilla doughnuts are really easy for kids to make and fun to decorate, great for my nephews! I drizzled mine with white and dark chocolate, really I should have dipped them, then scattered over the sprinkles. 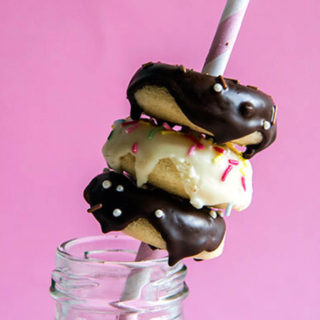