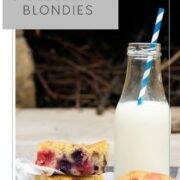 A match made in heaven and true indulgence! These white chocolate, raspberry and blueberry blondies are one of the best ever flavour combinations Super easy to make and absolutely delicious!

…is not devouring all of these blondies in one sitting!

I’m a bit behind this week with my baking; to be honest, I’ve got a couple of days off but I’m feeling revitalised and my bake is well and truly back on.

After the huge chocolate hit of the chocolate, caramel and Oreo tarts earlier in the week, I thought I’d go for something a little lower down the calorie scale.

I had planned to be a little adventurous and make ‘Twix’ inspired macarons; alas they were a disaster of epic proportions. Admittedly it was only my second attempt, the whole learning to walk before running thing never rang truer.

So with the macarons ditched, there was really no rescuing them; I decided to go for something a little on the less involved side of things.

As usual, there was a few bits and pieces lurking in the fridge that needed using up – raspberries and blueberries from a wedding cake, that I thought I could throw in the mix.

Originally I’d been thinking of making brownies again, it had been a while, but with the earlier chocolate-fest, I really couldn’t face them.

Now you know I don’t mean Debbie Harry, but I’d be lying if I said, I hadn’t got “Marrrrrrriaaaaa” going round my head whilst I was making these!

These are the lighter cousin of the brownie!

They’re not as gooey as a brownie, it’s still chewy and can be a little more cake. With the leftover raspberries and blueberries mixed through, they’ve got a little squish to them.

I couldn’t bear to leave them chocolate free so I chucked a handful of white chocolate chunks in there, because… well, why not!

Trust me when I say you can whip these raspberry blueberry blondies up in no time, without too much mess, no melting chocolate, and you can claim that they are healthy-ish; they do have fruit in them!

Fancy trying some other fabulous brownie and blondie treats, then why not check out these recipes for inspiration:

Will keep up to 4 days in an airtight container, or can be frozen up to 1 month.
Substitute the raspberries and blueberries for seasonal soft fruit; blackberries work really well.