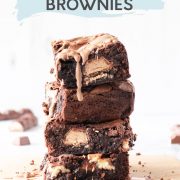 Hands up for the best brownies ever! Deliciously easy and utterly indulgent these Kinder Bueno brownies need to go straight to the top of your must bake list. Packed full of Kinder chocolate chunks and Bueno pieces with a chocolate hazelnut filling; you’re going to find them absolutely irresistible!

PROS: Use just one bowl, and full of Bueno, what’s not to like

Let me introduce you to your new favourite brownies ever… fact! These Kinder Bueno stuffed brownies are one of the most fudgy and deliciously easy traybakes you’ll ever make.

Yes I know I said my Rolo brownies were the best ever. But let’s be honest, you can never have enough recipes that are full of chocolate, sugar and butter, can you?

I’ve been meaning to bake these for so long, and honestly the Bueno’s have been tucked away in the baking cupboard since last year. I know… how terrible is that. Those hazelnut cream filled wafers don’t deserve to be hidden away.

But finally the time has come, and here they are. Are you ready?

Why you’ll love these brownies

Before we get going, let’s just take a moment to appreciate the beauty of that dark chocolately batter and those pockets of hazelnut cream. Just close your eyes and imagine eating them. Tastes good right?

If you Google brownies you’ll get 1000s of hits, so what makes these brownies extra special? Well they’re…

Once you’ve got the brownie recipe nailled, you can switch out the Bueno for your favourite chocolate bars or even cookies, like these super orangey chocolate Jaffa Cake brownies!

What you need to make this recipe

View my Amazon shopping list with equipment and ingredients

When I say the recipe is easy, I really mean it; and not only that there’s no fancy ingredients either. Here’s what you’ll need to get ready…

The best thing about these Kinder Bueno brownies are their simplicity, and while there’s no fancy ingredients there’s also no fancy equipment needed. Everything you’ll need will be right there in the kitchen cupboard.

All you’ll really need is a large mixing bowl and a hand held mixer, or a stand mixer if you have one. And if you’re after an arm workout, grab a balloon whisk.

How to make the brownies

Full measurements and instructions can be found in the recipe card

The brownie batter is whipped up in a matter of minutes so grab everything you need and lets bake….

Start off by melting the chocolate and the butter together in a heatproof bowl. You can do this either by placing the bowl over a pan of simmering water, or in the microwave in 30 second blasts (1-2). Pop the melted mixture to one side to cool down.

In the meantime, add the eggs and caster sugar into a large mixing bowl and whisk with a handheld mixer for about 3 minutes, until they are thick, pale and fluffy (3-4).

Add the melted chocolate to the whisked egg and a teaspoon of vanilla extract. Then with a rubber spatula mix until well-combined (5).

Next up, sieve together the plain flour and cocoa powder and add to the chocolate mixture. Gently fold the everything together, making sure that all the flour is incorporated (6-8). The batter should be thick and fudgy, just like it should be!

Pour the half the brownie batter into a lined brownie pan and spread out to an even layer. Scatter over the Kinder Bueno pieces, before add the remaining batter on top and levelling off (9-11).

How portions does this brownie make?

Depending on how big you cut the brownie, the recipe will make between 9-12 slices.

How should the brownies be stored?

The brownies are best stored in an air-tight container at room temperature.

How long will the brownie keep for?

The brownies will keep up to 5 days in an air-tight container.

Is it possible to freeze the brownies?

Yes! Once they are fully cooled, slice up the brownies and wrap them in baking parchment before placing in a freezer-proof container. They will keep for 1-2 months. Remember to fully defrost the brownies before eating.

I’ll hand on my heart state that this recipe is foolproof! But I’ll also admit that it can have its moments. Take it a tweak too far and you’ll end up with a cakey brownie or one that’s completely squidgy.

To make sure you get the perfect brownie everytime, here are my top tips… 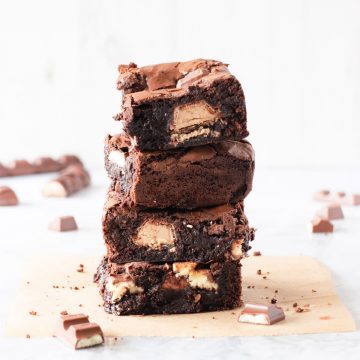