Deliciously thick and fudgy, these loaded Jaffa Cake brownies, pack a chocolate orange hit, that will keep you going back for more. Rich dark chocolate brownie, with layers of Jaffa Cakes inside; they are so easy to make, in just one bowl! Why not bake two batches so you don’t run out?

Chocolate orange for the win

Plain, dark, white or milk, it doesn’t matter which way I go with chocolate, I love it. Add an extra flavour, swirl something through it, or maybe a little crunch and you’re heading into chocolate heaven.

Give me a creamy, caramel chocolate speckled with honeycomb crunchie piece and I’m utterly in love.

So, what’s your favourite chocolate combo?

How about raspberry and white chocolate…

Or are you one of the chocolate orange fan club, like my Other Half?

There’s something about the combination of orange and chocolate that ticks the flavour box. And there’s no better way of combining the two than in the humble Jaffa Cake.

For those of us in the UK, or if you’re a bit of a biscuit aficionado, you’ll remember ‘that’ advert of devouring a Jaffa Cake in three mouthfuls. Hands up if you still eat yours the same way?

Now before you get stuck into these stuffed brownies, I’m just giving you a heads up, don’t try “Full Moon”. Well, you can if you like, but…

So instead, savour the chocolatey orangey goodness with the perfectly fudgy brownie. You can always go back for another slice.

Take me to the brownies already!

Let’s be honest here, to get a perfectly fudgy brownie we need to talk fat. The fat content of brownies comes from the two key ingredients: butter and chocolate!

If your recipe calls for more dry ingredients than the fat, you’re going to end up with a more dense, drier brownie. And in my opinion, that’s not what I call a brownie!

I can’t shout it out enough that if you’re baking, proper, creamy butter is always best. Substitutes such as margarine or ‘spread’ have lower fat and higher water content. So although they can work, they reduce that the silky, smooth richness of the perfect brownie.

Now there’s nothing stopping you using milk chocolate, but I’d use urge you to use a good quality version. Cheaper chocolate can be waxy or be packed full of sugar, and no one wants an over-sweet brownie, that doesn’t taste chocolatey.

For me, brownies are best when they’re made with high cocoa chocolate, 70% seems to hit the mark. Not only will it give you that deep chocolate flavour, but also that dark colour that keeps you going back for slice after slice.

How to make Jaffa Cake Brownies

Throw it all in one bowl

Yes, it’s another all in one bowl recipe!

So to get the recipe going, melt the butter and chocolate together over a double boiler or in the microwave (if you’ve not blown it up, like me). Then grab your mixing bowl and pour in the melted mixture.

Next up add the sugar and eggs to the mixture and zest an orange. Make sure you only take the orange zest, rather the bitter pith. Then it’s time to work those arms and give the mixture a good whisk until well combined.

It’s key to make sure the eggs are properly mixed in; they will give the brownie structure and when combined with the melted butter you get that stunning fudgy, richness that you’re aiming for.

Dry ingredients are next up – flour and cocoa powder. Remember, we want to use as little flour as possible and keep the fat content high.

So whilst the cocoa powder just adds an extra layer of chocolate into the recipe, the flour is there to hold everything together, but not cakey.

Now we could leave it there and add the brownie mixture into a lined tin and just bake, but where’s the fun in that?

Instead, only add half the mixture into a tin, then start stuffing!

Add a layer of Jaffa Cakes on top of the mixture, before covering them up with the remaining mix. And for added orangey goodness… top with a second layer. Then bake!

Watch how to make the recipe

Are the Jaffa Cake brownies baked?

When it’s time to check if your brownies are baked, grab your trusty skewer or toothpick. And rather than testing the centre of the brownie, go towards the edge about an inch or so in.

So always test the edge!

TOP TIP: Oven temperatures and recipe times can vary, so test your brownies 5 minutes before the end of the recipe time. If they need longer, check again in another 5 minutes.

Easy tiger, they’re even better the next day!

Now I know it’s tempting to dig straight in with a spoon and start scooping out that gooey, fudgy centre, as soon as you take your brownies out of the oven. But wait…

Although they will be utterly amazing and chocolatey, they are so much better when they’ve cooled and had the chance to firm up a bit.

And trust me, they’re easier to cut too!

What I used to make Jaffa Cake Brownies 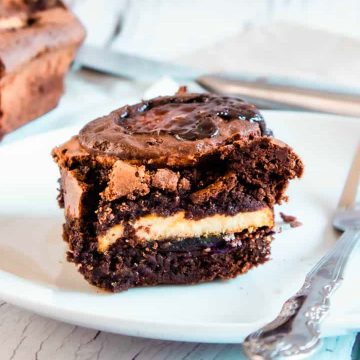