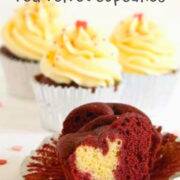 The most perfect Red Velvet cupcakes, soft and fluffy, topped with a luscious cream cheese frosting, and a hidden surprise baked inside!

I found my mojo… it was lost for a little while but it’s popped back up with a vengeance and I’ve been concocting a variety of cakes and bakes recently that will be making an appearance soon.

I thank the back to back Bank Holidays and the lighter Spring evenings for giving me the boost again. The dark winter evenings just aren’t the best for motivation or photographing, and food really doesn’t like flash (and neither do I).

But with Spring comes not just lighter evenings, but country walks, eating outside, catching up with family and friends, lots of birthdays, and the new crop of fruits, berries and vegetables popping up… everything looks, feels and tastes just so fresh; and the mind feels a little fresher too.

That said, I’ve still been baking away in the wings, and I’ll admit that these Red Velvet cupcakes were baked back in February (of course they were… hearts and cupcakes scream Valentines; don’t they?). But don’t fret they’re not still hanging around, they disappeared in a matter of hours.

‘Surprise Inside’ cupcakes seem to be one of those styles of cupcakes that just pass me by. Whilst I think the ingenuity of getting the design inside of the cake is pretty awesome, the engineering behind it seems a little too much hassle for me on an everyday basis.

There are times I just want a cupcake to be a cupcake, and a cake to be a cake; a good sponge and luscious frosting. Although curiosity got the better of me on this occasion!

Well, curiosity and having a layer of vanilla sponge going spare from another cake, looking a little lost and in need of a home. Usually, it would go in the off-cuts box for Ian to smoother with jam and spare frosting; but this time I thought I’d spruce up my Red Velvet cupcakes.

So then, those beauties up there are my ‘Reds’; lashings of cream cheese frosting piled on top of a bright red cupcake, with a little vanilla heart nesting inside!

I’ll take it back, in terms of the engineering behind them; these are actually pretty simple! Ok, if I was creating a ‘scene’ inside a cake there would be plenty of reverse engineering going on, but a little cute heart… you can do without losing any sleep over it (and believe me I’ve lost sleep over cakes and cake designs before).

I know my heart in the one below isn’t perfectly formed; I’m not quite sure what happened there. I think I might have cut the cupcake in the wrong place so it wasn’t all on show. And as the others were all swiped away by eager hands for waiting tummys, I didn’t get a chance to give them the photo shoot treatment; but you get the idea…

Getting your red velvet cupcakes red

There’s just one thing before I give you the recipe; let’s talk food colouring! Red Velvet cupcakes are by their name ‘red’ and to get the red you’ve got to use a colouring of sorts.

There are lots of colourings out there, and most recipes will tell you to use a liquid colouring, there’s nothing wrong with that. However, here in the UK the red liquid food colouring you will tend to find on the supermarket shelves is the Dr Oetker ‘natural’ one.

We’re all for natural here, but not this time. This colouring is made from beetroot, and as you do actually use quite a bit of it in the recipe it can taint the taste; not to mention turn you Red Velvets into a more Orangey-browny-reddy Velvet. So to keep the Reds red and not beetroot in taste, I use my trusty food gel colours; especially the Rainbow Dust Pro-Gel Red which gives me just the right shade of red.

Well then, Baked Inside Red Velvet cupcakes are go!

Try these other cupcake recipes… 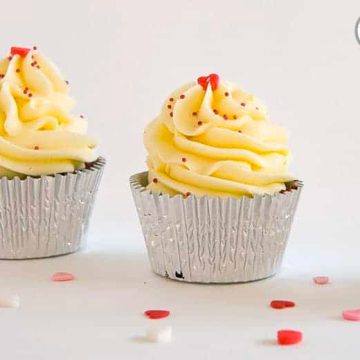 I prefer my cream cheese frosting to be stiffer than normal, I find it smoother to pipe, so I tend to use more butter in my frosting recipe than cream cheese. It still has the taste of cream cheese frosting but it is nicer to work with and doesn’t look ‘sweaty’ like some frostings can. Substitute the buttermilk, with 120ml of whole milk and 2 tbsp of lemon juice. Add the lemon juice to the milk and leave to one side of 10-15minutes to curdle. Any leftover frosting, can be kept in an airtight container, in the fridge, for up to 1 week.