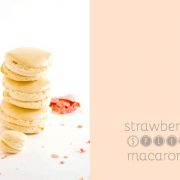 Judging by my Twitter feed every Wednesday evening, I’m pretty sure that the majority of you are completely engrossed in the Great British Bake Off at the moment.

Me… not so much, I hand on my heart haven’t watched an episode this year, and to be honest just reading Twitter is enough to keep me up to date with all the shenanigans.

However, it hasn’t stopped it infiltrating into my life in other ways and September heralds the start of the Great Bake Off at work. It’s all organised to tie in with the Macmillan Big Coffee Morning on September 26th, and I’m looking forward to a little competitive baking.

Although, there has been fleeting conversations in the kitchen about my ‘professional baking’ past and my entry; all in good humour and all with me blushing a little, as I don’t consider myself an amazing baker. I do something I love and others seem to like it too, that’s good enough for me.

The proof will be in the first round when sponge cakes come out. Yes, I have an idea of what I’m going to create, and no I’m not telling you… well not until it’s baked, judged and tasted. It could be a disaster…

Anyway, with all of this going on I thought it was about time that I sorted some photos out that have been sat in my Lightroom ‘To Edit’ folder for ages.

But, they tasted pretty darn good and I wanted to blog them as there’s plenty of things that don’t work that happen in my kitchen, despite the professional side of things.

Say hello to a Maca-pie!

Seriously, don’t get me started with all the crossover food naming and so-and-so thought of it first.

Now then, what can I tell you about these failed beauties?

Well, the recipe you’ll find at the end of this post, will actually work for proper nice flat, shiny shelled macarons. I have made them before, but the time I decided to photograph them, the photos were terrible and I didn’t blog them.

Also, what you don’t want to do, is to decide on the hottest day of the year to bake macarons, leave them to rest and the shell start to form with the sun beaming straight on top of them.

And then, when they are baked, instead of rising with a nice puffy foot and the top staying smooth and flat; what actually happens is the glorious sun has welded the base of the mac to the baking parchment, the foot can’t rise, and thus your macarons erupt like Mount Vesuvius.

They’re not really *that* bad, I’ve had worse macaron fails before, completely inedible, not even making it off the baking sheet fails.

So when these failed, it wasn’t the end of the world, it was make the best of a bad(ish) situation and just roll with it.

The non-pink macaron shells weren’t overly disastrous, they didn’t all erupt like the pink shells, they just decided that they didn’t like the nice round shape that I’d piped them into, and so they ended up more randomly shaped, which meant matching two shells together wasn’t as simple but it wasn’t a travesty, they still resembled macarons.

So what did work?

Well what was a success was that I had two batches of misshapen macaron shells, in two different colours, as I set out to do, that were sandwiched with the a vanilla frosting.

The inspiration behind them was a reminiscing Pinterest session and the ice cream and lollies of my younger years, in particular why did my Other Half not know what a Strawberry Mivvi was (Strawberry Split lolly, in case you are wondering).

The frosting worked, and they tasted as they should, so despite not looking pretty, they were winner! 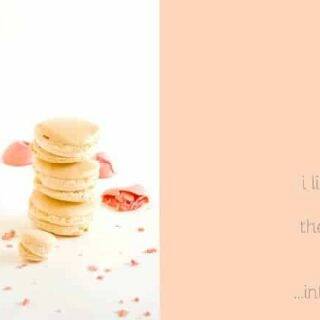 For the Macaron Shells

Any unused macaron shells can be keep up to 3 days in the fridge, or they work crumbled over ice cream.