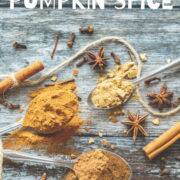 The perfect blend DIY pumpkin spice mix to bring the flavour of Fall into your kitchen, taking you from Halloween to Thanksgiving. Use it in recipes for cakes, bakes, cupcakes, muffins and recreate that famous pumpkin spice latte.

It’s here, or almost here. Autumn is only days away, which means its officially comfort baking season too! Kicking up leaves on windy walks, whilst your jacket is zipped up to your nose and you’re smoothered in a big woolly scarf is great, then coming home to the smell of a caramel-y, cinnamon-y treat baking away.

Autumn is packed full of signature flavours; cinnamon, apple and caramel, especially when they’re all together in my favourite toffee apple tart or toffee apple cupcakes. But there’s another autumn flavour that heralds the new season’s arrival… pumpkin spice.

I’m not a huge fan of adding cinnamon to drinks, so I’ll admit I was a little late joining the pumpkin spice bandwagon; there was just no appeal. That was until I accidentally tried a pumpkin spice latte from the famous coffee chain. Ok, the flavour in a PSL comes from the syrup and it is seriously sweet, which satisfied my niggling sweet tooth, but having tried it, I vowed that there had to be a next time.

As autumn approaches, the wind starts battering against the windows and the rain returns, the weather’s mood has changed and so has my baking mood. The summer berries are now few and far between, instead the fruit trees in the garden are dropping their wares; apples and pears.

We’ve already had our first autumn crumble, but there was something missing… pumpkin spice. I scoured the shops but there none to be had; but hang on I’ve got a cupboard brimming with herbs and spices, surely I could make my own.

In fact it is absolutely super simple to make you own DIY pumpkin spice mix, and super quick, and like me I can guarantee that you’ve probably go the essential spices lurking in your store cupboards. Pretty much every recipe that I’ll make over autumn will have a sprinkling of this DIY pumpkin spice mixed into it, so making up a jar and keeping it in the cupboard is easier than mixing each time I need it.

Just like the spices, I bet you’ve got a spare jar lurking too. It doesn’t have to be anything fancy, maybe a cleaned out jam jar or perhaps you’ve got a couple of the small Kilner jars hanging around as well. Whatever you use, make sure it’s clean and dry before filling it with you DIY pumpkin spice mix otherwise it will just all clump together.

Right then, spices. For this mix you need the grand total of 4 – cinnamon, ginger,  nutmeg and cloves, all ground up. The cinnamon here is the star of our DIY pumpkin spice show, and whilst you might find some recipes call for all spice or mace to be added, the spices that you are is entirely down to personal taste.

For me, I really not a fan of mace and all spice is a little overpowering, so instead I use the ground ginger to adjust the balance of flavours. All your then need to do is add them into a jar and shake…

Ultimately, even if you head out and buy the individual spices you need for a DIY pumpkin spice mix, you’ll get a lot of spice mix for your money, and it will be significantly cheaper than buying a ready-mixed mix.

Once you’ve made your own DIY pumpkin spice mix, the only thing left to do is use it; but what will you add it to? Whether you’re adding it to cakes, bakes, cupcakes, muffins, drinks or pies… let me know in the comments below your favourite pumpkin spice recipe. 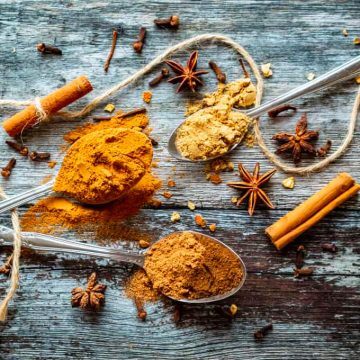 The spice mix will keep fresh in a sealed jar for up to 6 months.