Rhubarb, rhubarb... apparently when actors are pretending to talk in the background when onscreen, that's what they mumble. It's meant to be indistinct and contains no recognisable sounds. That might be so for the word, but boy is actual rhubarb anything but indistinct and unrecognisable! The unmissable bright pink stems and giant fan-like leaves (remember to always remove them: they are poisionous!) that spring up in our veggie area in April put a little spring in my step and send my Pinterest boards into meltdown, as I think of all the wonderful things I can do with them.

Until I finally tried rhubarb in my late teens, I'd been content to say that I liked rhubarb on the basis of being able to demolish a packet of rhubarb and custard sweets in one sitting. Of course, they weren't real rhubarb but the bright pink and yellow sweets tasted in my mind just as rhubarb should do. How wrong was I?

Fresh, real rhubarb isn't sickly sweet, but sour, wonderfully sour in fact with a sharpness that cuts. As I've learnt over the years, using rhubarb just as it is, is ok, but to truly appreciate the flavour of this beautiful vegetable a little sweetening helps it to get on with other flavours; and there's nothing better than with a smooth, creamy panna cotta. So that's exactly what I did with the first crop... rhubarb panna cotta.

There's nothing more simple than a vanilla panna cotta, not just in flavour but looks, flecked with little specks of vanilla beans. There's not much to it, just 3 ingredients, there's no custard or baking, and if it takes more than 5 minutes to make, you're doing something wrong. Despite that, the simplicity of making a panna cotta seems to scare so many, especially that elusive wobble of the creamy jelly. It's either too stiff and sits like a brick on the plate or it doesn't set and disintegrates into a puddle. The balance of getting the gelling agent, gelatine for non-veggies, or agar agar for veggies and vegans, seems to be a case of crossing your fingers and hoping for the best!

But fear not, I have a recipe that gives you a perfect wobble every time; and if you don't want to risk turning out a puddle, leave them to set in a glass. It's not a cheat, honest. I promise. For me, it's glasses as each person gets more than if I was to use my diddy ramekins. Sometimes size is important. So before we get back to the rhubarb, here's...

Now I've got you wobbling perfectly, my rhubarb panna cotta recipe is below; but if you're like me, you've got more rhubarb than you can... well... shake a rhubarb stick at, so rather than just give it away as most people do, here's 5 other things to do with that beautiful pink veggie that springs up in the corner of the garden that you forgot you had...

And if you're still not sure, chop up the rhubarb into 2cm pieces and freeze for up to a year. Just don't forget to remove the leaves - they can be poisonous!

I hope that you enjoy these as much as I do. If you decide to give these rhubarb panna cotta a try, then let me know how you got on. It would be great if you could give the recipe a rating below and leave me a comment if you do!

Feel like topping your panna cotta with something a little different? How about a zingy lemon and gin curd or a salted caramel sauce. Go check them out! 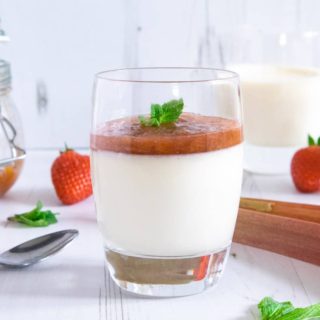 For the Panna Cotta

Prevent your screen from going dark

... the dessert obsessed baker from the Cotswolds and I'm here to guide you through making deliciously easy desserts you'll want to make again and again.