The title is a give-away but if you’ve wandered over to this post in expectation of a little festive baking and you’re not as big a Harry Potter fan as I am, you might want to take a look at my candy-cane striped pinwheel cookies instead. But perhaps I can persuade you to take a look about the wonders of the Wizarding World. PS. If you’re looking for some top tips for Muggles visiting The Making of Harry Potter, scroll down to the end.

So it finally happened. It was going to. It was inevitable. But as one birthday card still displayed in the lounge atested, it can be avoided if you just think of it as “18 with 22 years experience!” If your maths is up to scratch, you’ll have worked out that I’ve joined the 40 Club! Gulp! Actually, so far its not that bad!

The last milestone birthday at 30 saw us jetting off to Florida and me getting in line with all the kids to collect as many photos with characters as I could. Alas despite my best hinting, returning to Florida, Disney and the added bonus of Harry Potter World at Universal, it just wasn’t going to happen. So enter Plan B, the Warner Brothers Studio Tour. Don’t get me wrong for a minute, this wasn’t a second rate option, its up there with the best. I’d been wanting to visit the studio tour for years, but in all honesty we’ve never been that organised. However with tickets available on my birthday, the day booked off and Halloween arriving at Hogwarts, the deal was sealed.

Now before you run away with your fingers in your ears, singing ‘lalalala’ because you don’t want any spoilers. I really don’t want to spoil it for you, so I’ll try my best not to give too much away. For years I’d avoided friend’s Facebook photos of visits, blog reviews and all manner of Harry Potter related excitement and it was the best thing, because the enchantment, magic, mystery and surprise were all the more special. 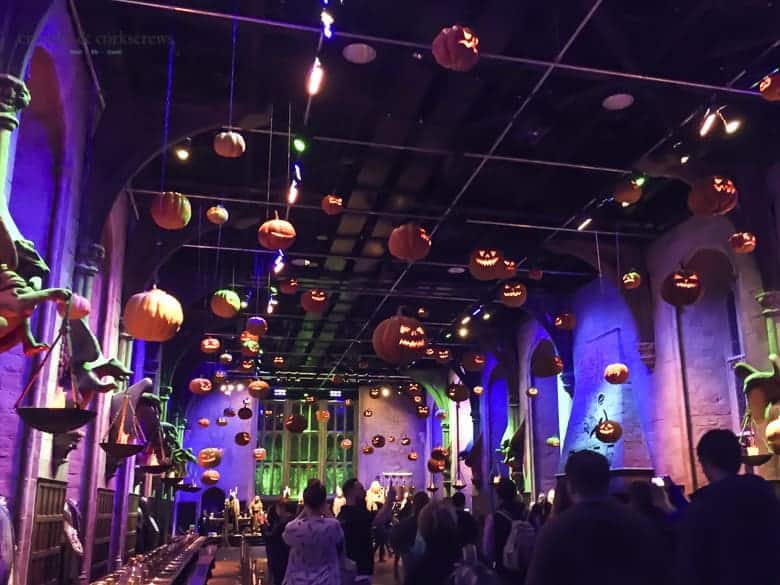 I hardly need to tell you that Harry Potter is a phenomenon like no other. As I’m curled up under a blanket, writing this and watching The Goblet of Fire, I remember it fondly as my first Harry Potter book. Picking it up from Sainsburys and getting lost in the pages for days, then tracking down the first three books in Coventry Waterstones. The hype had already started about “The Boy that Lived”, little did any of us know how big a part of our lives that Boy would become. 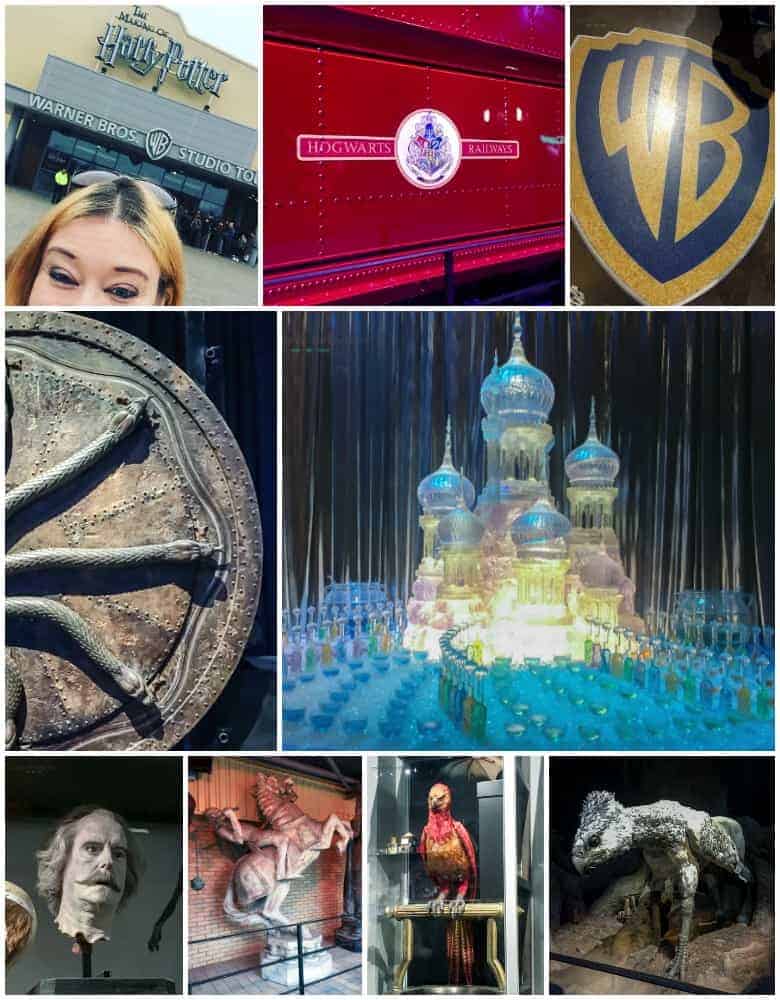 The first part of the tour is really to control the number of people going through at the beginning, but you can feel the sense of anticipation and excitement building, and the next thing you know you’re walking into the Great Hall. I’ll admit that there were tears in my eyes; it was just a little bit special and mind blowing! 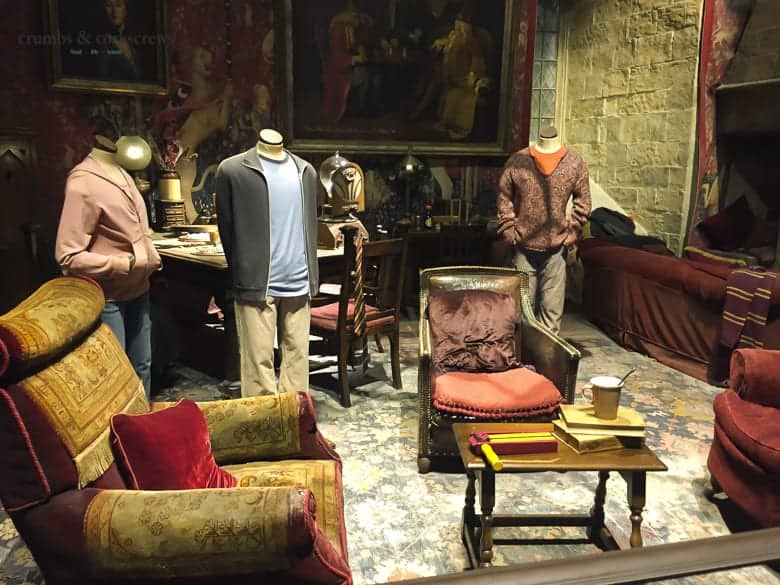 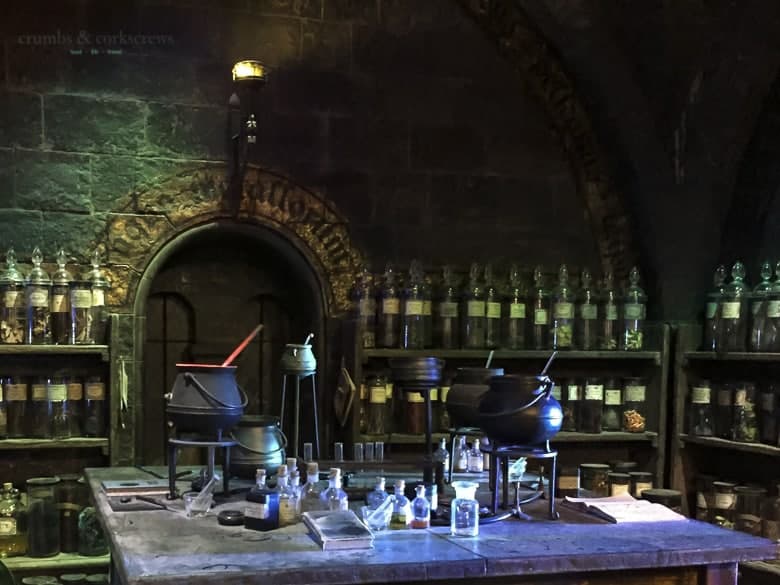 As you move through the tour, you heard little gasps of ‘wow!’ and ‘oooo’ at all those props, costumes and sets that if you’ve watched the movies as many times as I have, you can picture them on screen. Everything looks and feels so familiar, and even though you’re actually in an aircraft hanger just outside of London, you ‘really’ are standing in Dumbledore’s office! 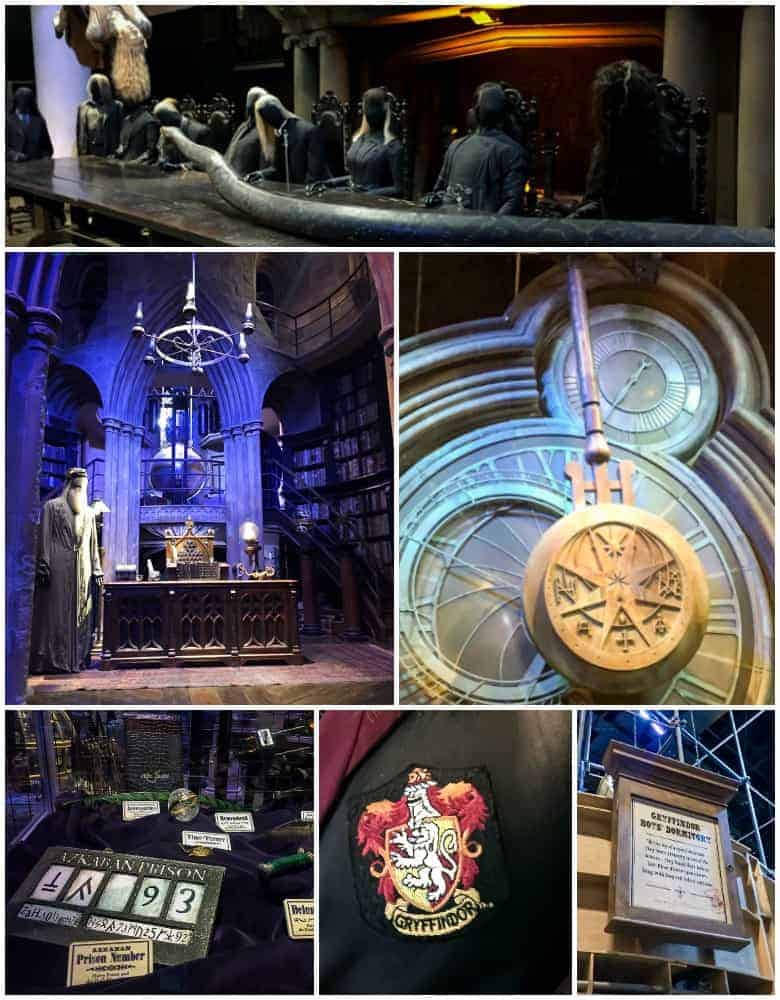 No section is without its secrets and surprises, some I had that ‘feeling’ about and others were a complete surprise. I loved how the ‘heater’ in the centre of the Gryffindor Boys Dorm was actually the one used in the movie Chocolat, with Johnny Depp, and all those paintings and portraits that line the walls of Hogwarts… well, they were all painted by classical artists and are of the cast, the crew and their families. How cool! 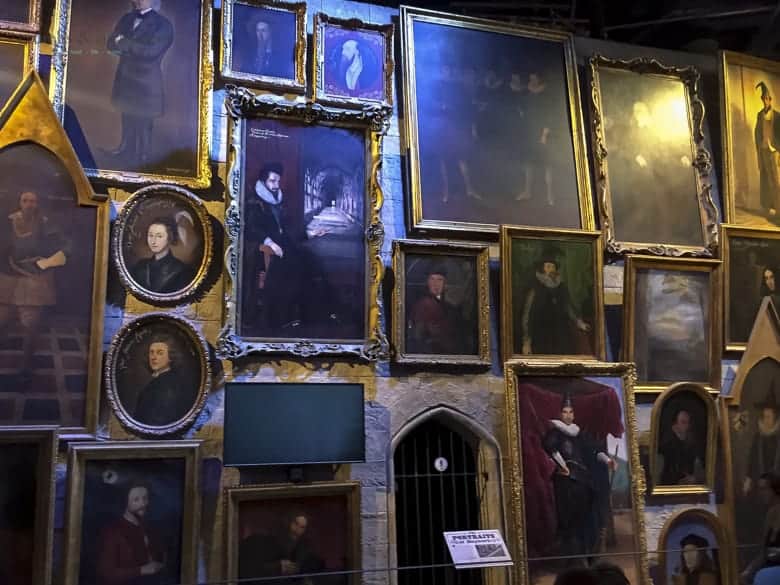 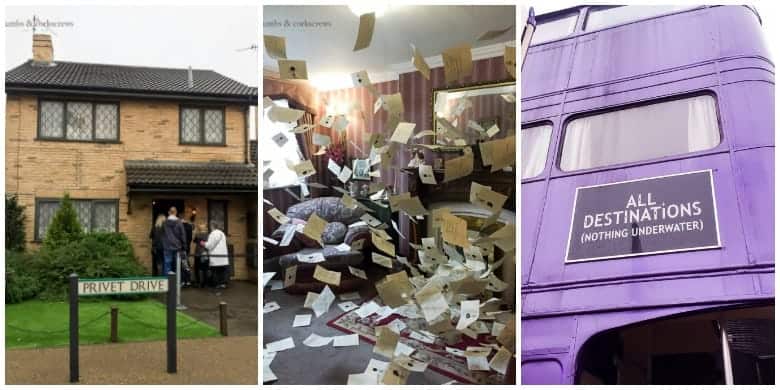 I could go on and on for days about what we saw, from the Potions Dungeon, full of detail and Snape’s iconic costume, cue more tears at the lost of the amazing Alan Rickman, to getting on a broomstick and flying down the Thames; or the amazing set for the Ministry of Magic, and how those tiles are so shiny (check them out and prepare to ‘wow’ again). Perhaps you’ll take the long route round the Forbidden Forest and try not to scream ‘oh ****’ infront of a load of children; maybe not if you are terrified of spiders (I am, I did it, it creeped me out); then don’t forget to board the incredible Hogwarts Express at Platform 9 3/4 and stop off for a Butterbeer (most bizarre stuff really). 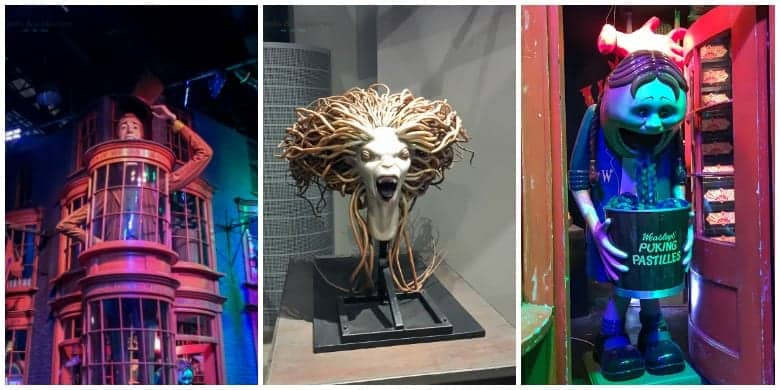 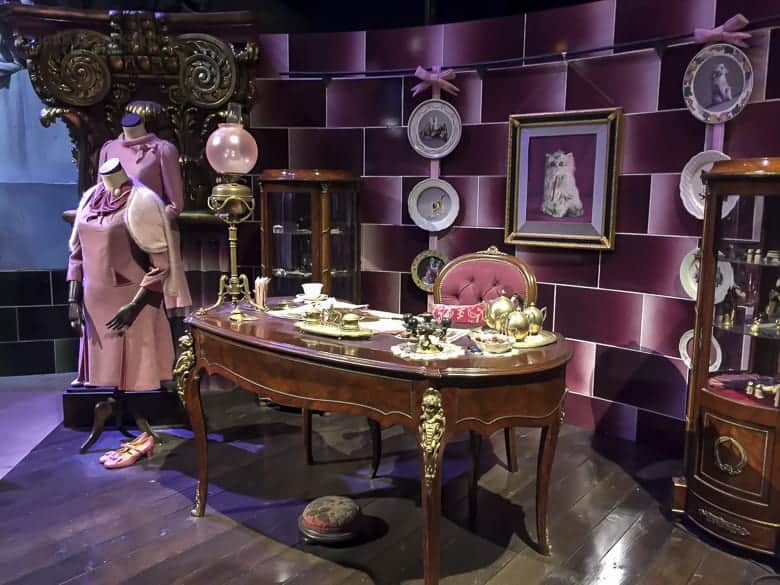 But seriously, there is so much to do and see, and we spent over 5 hours there – the Night Bus, Privet Drive, Godrich’s Hollow, the animatronics room (completely cool), Diagon Alley and Hogsmeade, the architecture rooms and the original concept art… on and on… more and more… enchanting and magical. Secrets are everywhere! 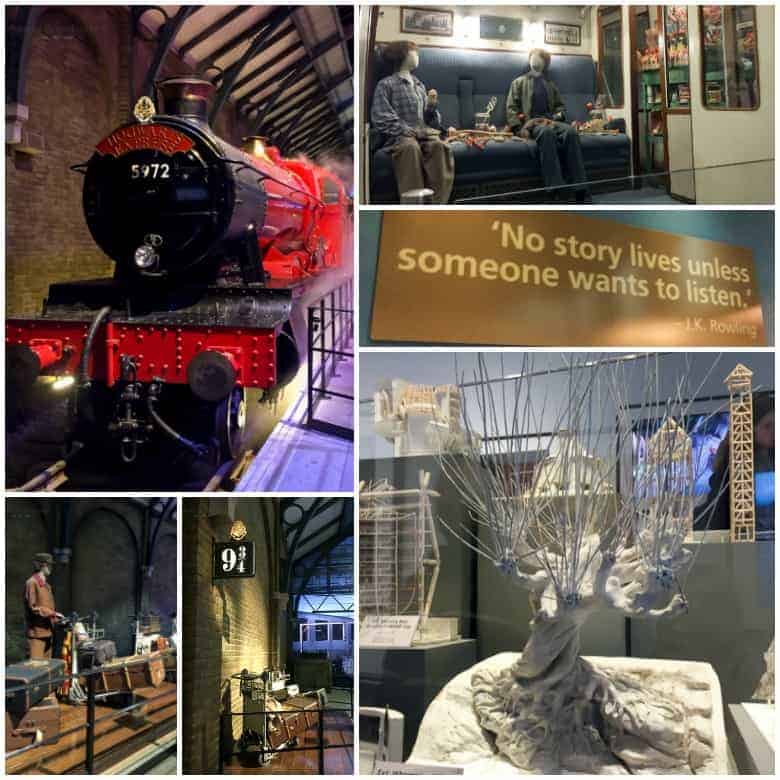 And then right at the very end, the final 2 rooms, more tears… breath-taking! 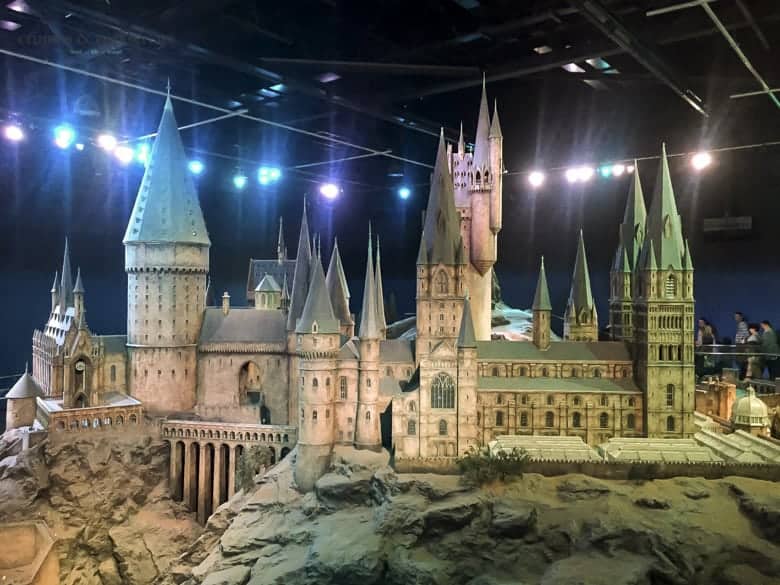 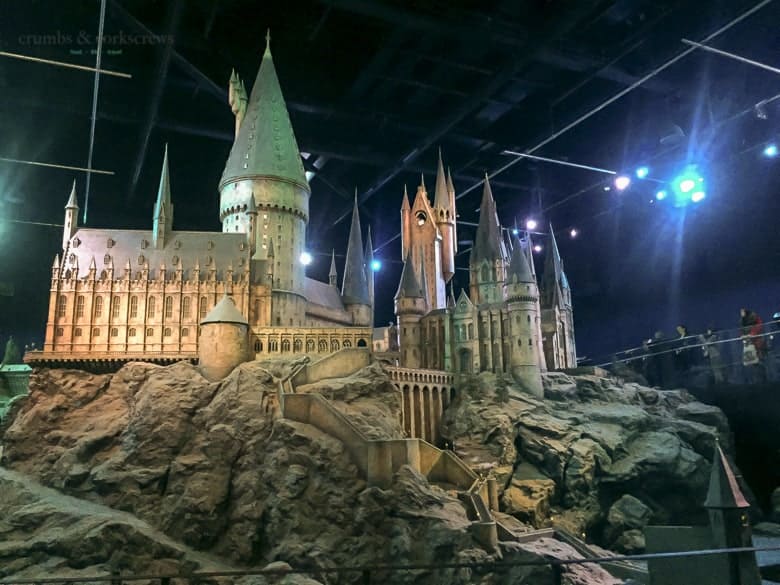 I really didn’t expect to be that overwhelmed by the whole experience, but I guess when it becomes so much a part of your life and culture, there are so many things that can trigger memories… like I said I remember by first Harry Potter book; I also remember going to see the first film, and then screaming at the 2nd at the back of the Odeon in Coventry. And with all of this, there are new generations coming through that are falling under JK Rowling’s spell, from the little witches and wizards all dressed up for the tour, to the grandparents experiencing Harry Potter for the first time as they read to the smalls.

I hope that you haven’t minded a little interlude from recipes, restaurants and Christmas planning. I was just too excited not to share. Someone said to me when we got back, did it not spoil the magic, knowing how it was all done. To be honest, no! It brought it more to live for me, to appreciate the details and the work that goes into each and every set, to bring JK’s vision to life. And, if I’ve triggered an urge to visit the studios, perfect, and for now… Mischief Managed! 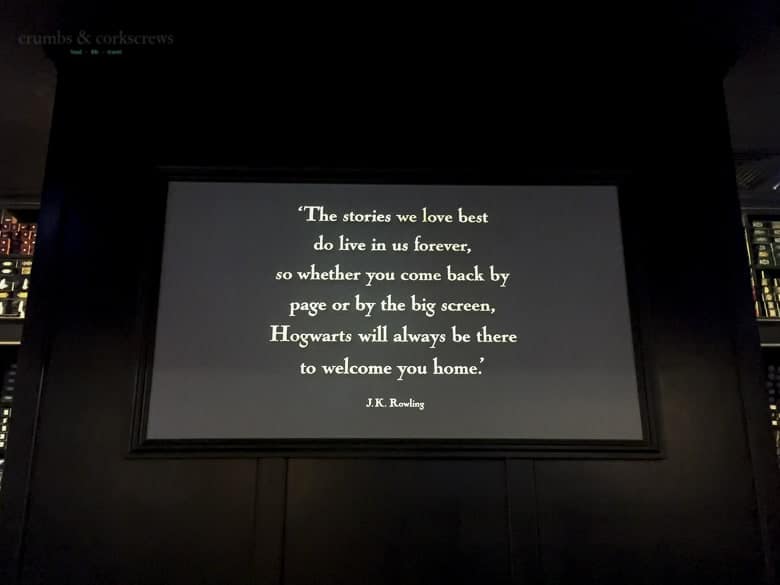 Book an early time slot… if you can
Like I said, you can’t just turn up and buy a ticket; and although you buy a ticket for a specific entrance time, that doesn’t restrict how long you spend inside the tour. Once inside, you can stay as long as you like. We were booked for 9.30am and spent about 5.5 hours in the studios.

Take your time and treat yourself to an audio tour
Needless to say that there is just SO much to see; and although we took our time, I’m sure we missed so much as well. The best thing we did book tickets with the audio tour (you can pick one up when you get there as well, if you haven’t booked one with your tickets). Each section through the studio is numbered and corresponds to sections on the interactive map, and this gives you additional narration about what you are looking at, closes up of props, videos and even the 1st screen test of Daniel Radcliffe before he was cast as Harry.

Hop on the Warner Bros. Shuttle
We drove down to Leavesden, leaving the Cotswolds before the sun came up. The journey, except for M4/M25 usual traffic, was straight forward and at the sight of the first brown sign, my squeals of delight went up several octaves. If you are coming from further a field and travelling by train, or coming from London, hop off at Watford and for £2 return, you’ll find the Warner Bros. Shuttle outside of the station. You can’t miss the buses, they’re covered in Harry Potter. To give you an extra hand when planning your trip, Warner Bros. have a handy Getting There guide on their site.

We visited The Warner Bros. Studio Tour – The Making of Harry Potter on our own accord. Thoughts and feelings are my own.