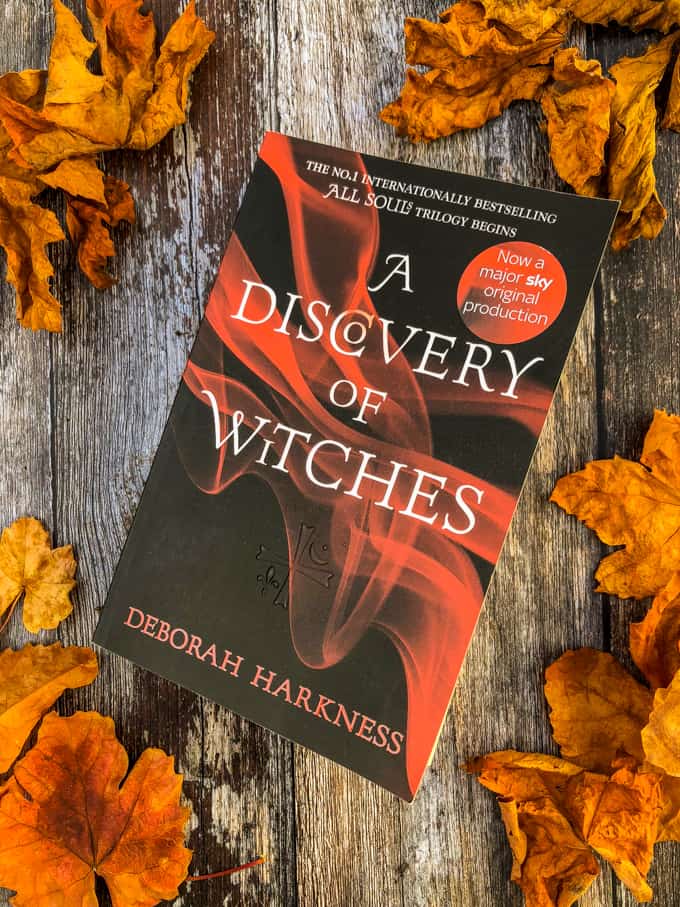 Summer’s gone and we are officially in autumn which means a windy chill whips around the house, the leaves are crunchy under my feet, evening’s are spent curled up on the sofa with a good drama and Halloween is just around the corner! But this year, it’s not all ghosts and ghouls, enter the realms of the lives of witches, vampires and daemons with Sky One’s new 8 part mini-series, A Discovery of Witches, adapted from the first book of Deborah Harkness’ All Souls Trilogy.

If you’ve ever wondered about the world of witchcraft, ritual and magic, then A Discovery of Witches is for you. In fact, it was a rainy trip to Mexico and looking at airport bookshelves thinking about the lives of immortals, that spurred Deborah to put pen to paper and write a truly bewitching tale that was to begin the All Soul’s Trilogy, back in 2011. Yes, really… in this day when it seems books become mini-series’s quickly, it hasn’t been a straight to TV affair for Deborah’s first book; which actually makes it all that more special in my opinion.

Having read A Discovery of Witches way back and being entranced by the love story shrouded in the mystery of witchcraft and magic, when I was invited to attend an advanced screening of Sky One’s new series and a private tour of the new Spellbound exhibition at the Ashmolean Museum; how could I not go!

A Discovery of Witches… The Plot

Before we get into what must be one of the highlights of my autumn so far and I fan-girl a little; hands up who has read the book? Yes? No? Don’t worry, I promise you that even if you haven’t read the book, then you are going to love this mini-series.

Our leading lady is Diana Bishop, played by  Teresa Palmer (Warm Bodies), a historian and witch, who opens an alchemical manuscript in the Bodleian Library, exposing her to a world that she’s stayed away from since the death of her parents. Bringing Diana back into this world of magic, the discovery of the manuscript draws powerful creatures to Oxford; witches, daemons and vampires, including the mysterious vampire geneticist, Matthew Clairmont, played by Matthew Goode (Downton Abbey). Diana attracted to Matthew, and despite a ancient resentment being witches and vampires, joins him to delve into the secrets of the manuscript and their feelings…

Head on over to Deborah Harkness’ website for more information on the All Souls Triology! 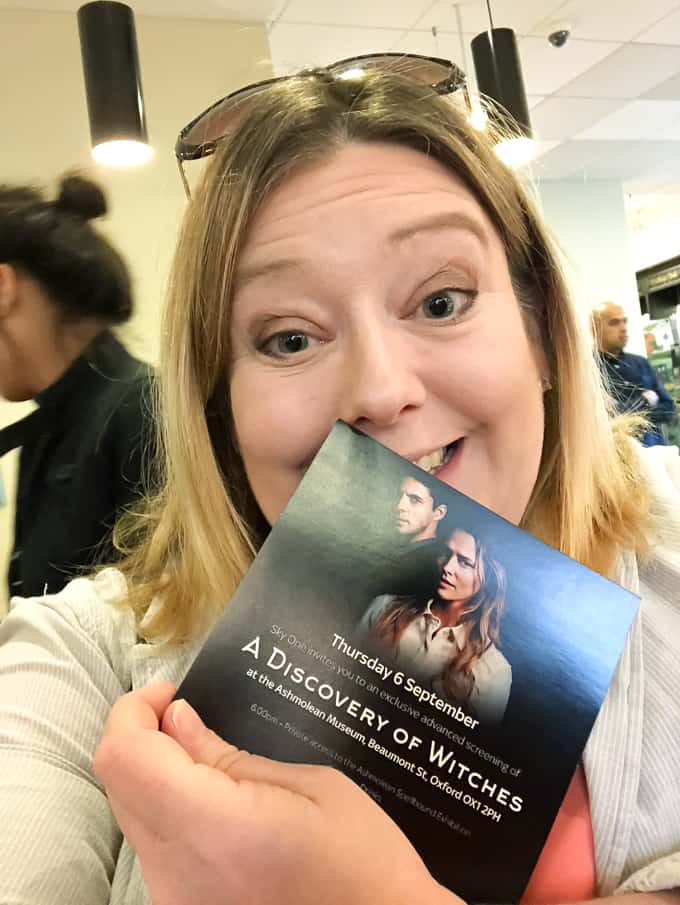 Are you ready? I am, even more so after watching the first episode. O-M-G! Don’t panic there’s no spoilers here!

Now for me Oxford is the home of Endeavour, Morse and Lewis, but so many TV series’ and films have been shot in the City. The stunning architecture of the colleges has captivated me ever since I first visited many years ago, and when one of my first bride’s weddings took place in the chapel of Balliol College, it felt a truly magical experience. On every corner you’ll find a tour guide or someone holding an umbrella aloft to guide groups, but if you’re hooked on A Discovery of Witches, check out the walking tour of the book’s locations with Deborah Harkness and keep an eye out for them when the series airs.

The evening’s events kicked off with a book signing and a “DNA Lab” at Oxford’s Waterstones book shop; when I arrived the queue was out the book and round the block. Now I knew it had been a Sunday Times Bestseller, but I didn’t realise the book had such a following. Whilst both Deborah and Teresa were busy signing away and meeting fans, we were invited to “enter the lab”. Was I going to be a witch, daemon, vampire or even human? Convinced I was going to be a witch, I took my seat front and centre in the main window of Waterstones… Well, if there was every proof needed that I’m human, I have it now! 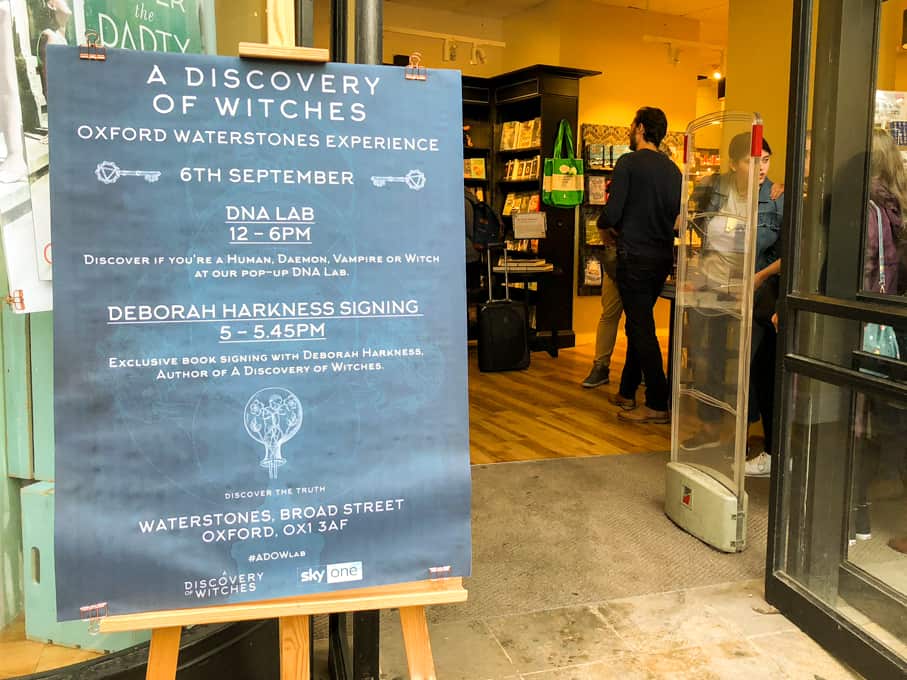 Spellbound at the Ashmolean

Before the rain set in, the invited bloggers walked over to the Ashmolean Museum for a private tour of the new Spellbound: Magic, Ritual and Witchcraft, curated by  Dr Sophie Page, of University College, London. Shamefully, although we only live an hour from Oxford, I’ve never visited the Ashmolean. Founded in 1683 and housing the University of Oxford’s art and archaeology archives, I hadn’t realised quite how big the museum is. The British Museum is one of my happy places, but outside of London, I feel that the Ashmolean could hold a special place too. I will definitely be back, there is so much to see and admission is free. 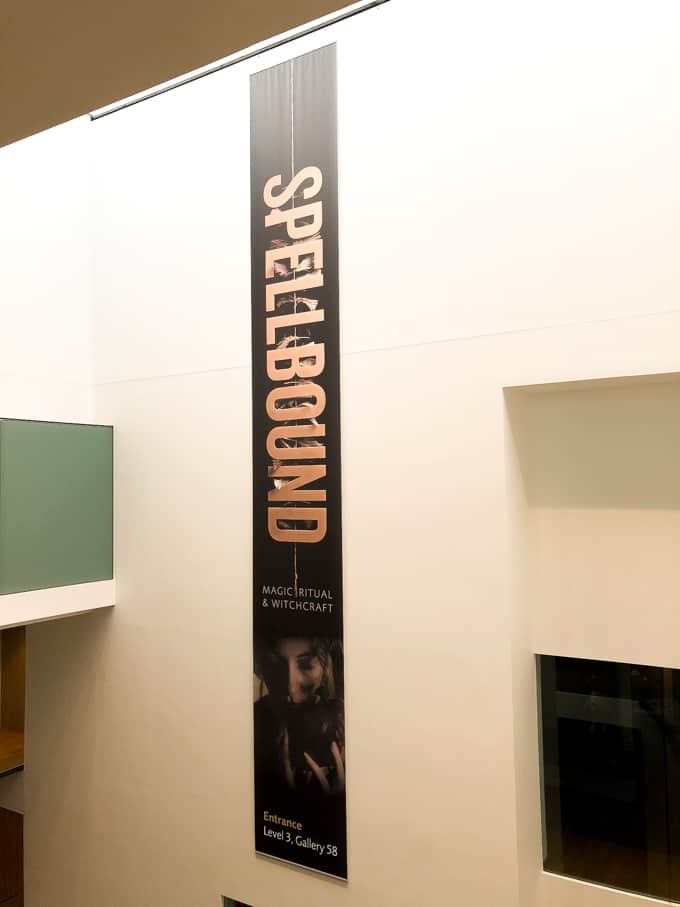 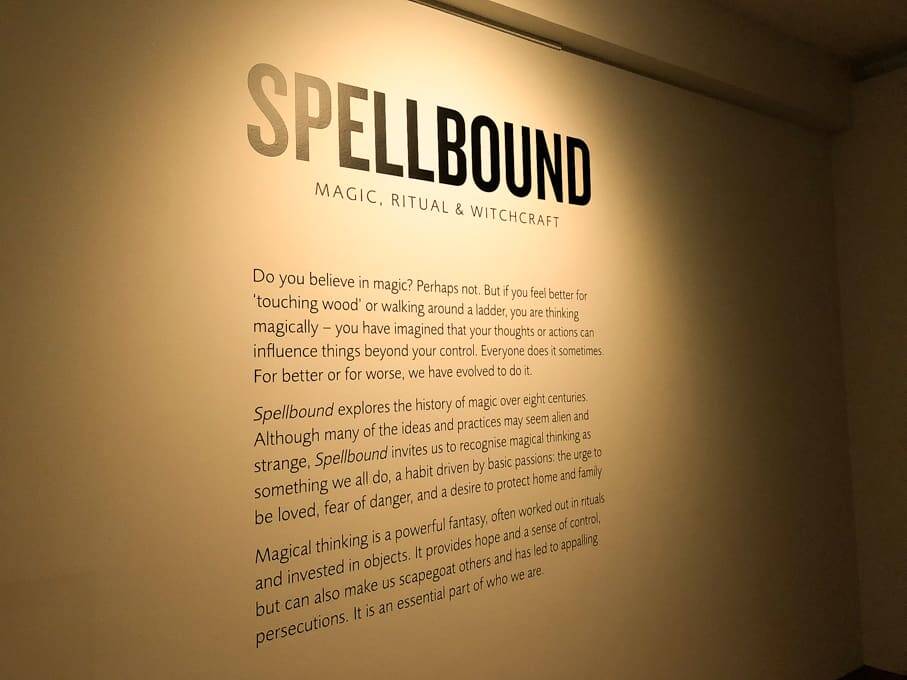 The Spellbound exhibition was utterly fascinating and equally quite scary; this definitely isn’t one for children and isn’t out of the pages of Harry Potter wizardry. This exhibition pushes the mind to a place combining faith and fear, and the power that can hold over a person. From the medieval parchments of incantations, to Matthew Hopkins’ original manuscript ‘The Discovery of Witches’ written in 1647, to the love locks that grace bridges all around the world that have become a ritual of the modern age. The exhibition is thought-provoking and extremely powerful, and Dr Page was on hand to talk about the exhibits and their background. Although I found some of the items on display dark and foreboding, my psychology background was intrigued by the power they could have on a person’s life. 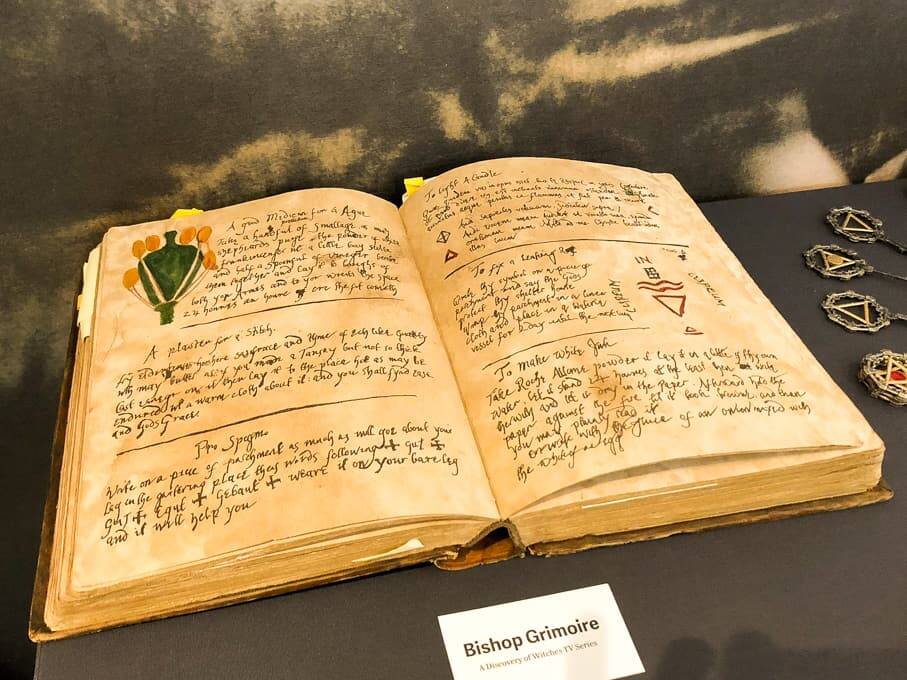 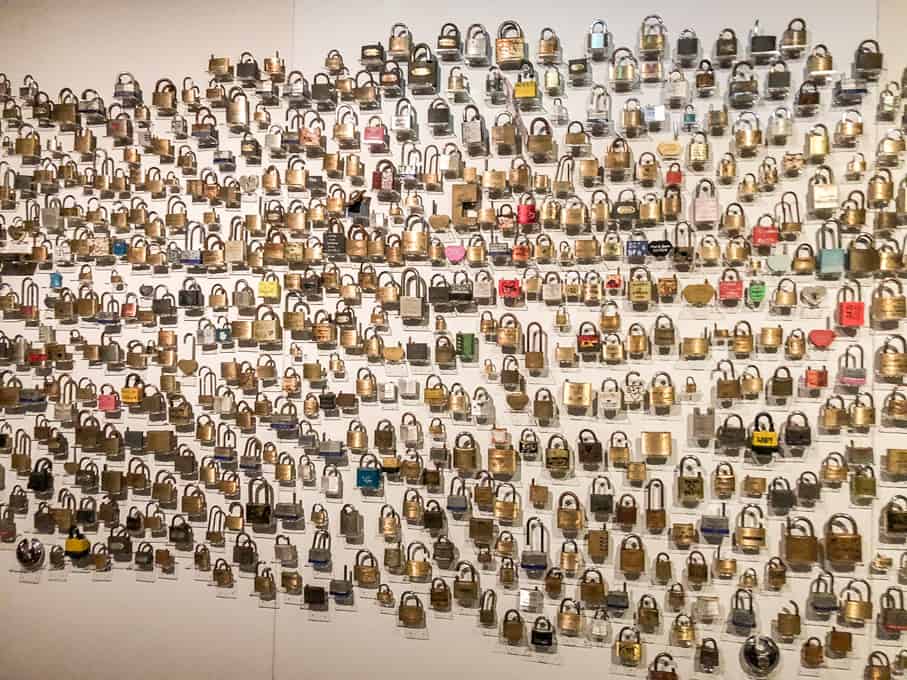 Due to the nature of the exhibits, photographs were prohibited, but I would highly recommend a visit to explore magic and it’s role in our lives over the last eight centuries.

First Peek at Sky One’s A Discovery of Witches

After our tours, drinks and a meet up with other bloggers, we were guided to a room filled with Italian art and crystal chandeliers to watch the very first episode of A Discovery of Witches, exciting! I couldn’t have thought of a more perfect location, the cinema will never be the same again. Following an introduction by Deborah Harkness and Teresa Palmer, the lights dimmed and we were off for an hour of heart-racing and edge-of-seat viewing, that finished with a huge round of applause and cheers. Wow! 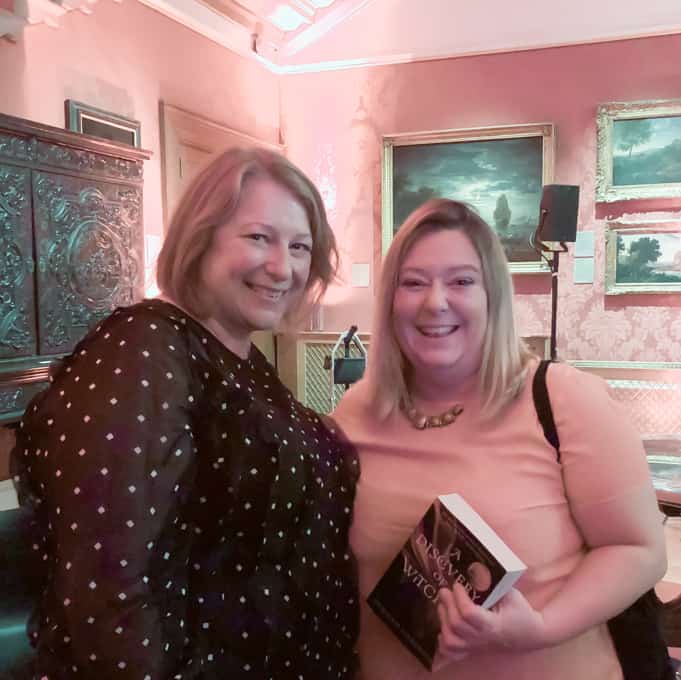 The Verdict. Was it that good? Oh yes, it certainly was and some more. But that’s all you’re getting. If you want to find out more, then make sure you tune into Sky One for the premiere on Friday September 14, at 9.00pm!

Don’t forget to let me know what you think of the first episode… drop me a comment below!

Disclosure: With huge thanks to Sky One for inviting me to attend an advanced screening of A Discovery of Witches and to tour the Spellbound exhibition at the Ashmolean Museum, Oxford. A Discovery of Witches airs on Sky One and NowTV at 9.00pm, from Friday 14th September 2018, for 8 weeks. The Spellbound: Magic, Ritual and Witchcraft exhibition runs until 6th January 2019 at the Ashmolean Museum, Oxford. Booking is advised.