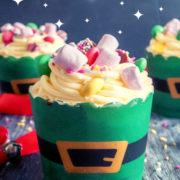 It’s a question that divides generations, boys and girls. For the men, it’s always ‘Die Hard’; nothing says Christmas like Bruce Willis in a vest. For the more nostalgic of us, ‘It’s a Wonderful Life’ tops the watch list. But for the little ones and us big ones that still believe in Father Christmas, it’s hard to pick between The Muppets Christmas Carol, Arthur Christmas and Elf.

For me, I’ve been captivated by the magic of Aardman and Arthur Christmas; it’s full of love, laughs and Santa spirit that never fails to bring a tear to my eye. I utterly adore it! But the one film that signals the arrival of Christmas when it airs is Elf!

If you haven’t watched Elf then I wholeheartedly suggest you do, it’s full of feel-good factor that will warm you right down to your toes and have you feeling festive in no time. That and Elves have the best diet ever. The 4 Elf food groups being candy corn, candy canes, candy and syrup. Mmmm syrup!

Well, maybe it’s not the best diet, because, you know, sugar is not good for your teeth! But it’s Christmas, so we’re allowed to indulge a little, and Buddy the Elf certainly does with his breakfast spaghetti. Piled high with mini marshmallows, M&Ms, sprinkles, candy, chocolate sauce and of course syrup; the only thing that raced through my mind at the speed of Santa’s sleigh was that they’d look good on top of a cupcake. Always thinking about food as usual!

These Buddy the Elf Breakfast Spaghetti cupcakes have almost everything that an Elf would wish for. I had scoffed all the candy corn left over from Halloween, and I wasn’t sure it a candy cane would work well with all the other toppings. I got two of the major Elf food groups in there so its a start.

Let’s start with the frosting because that’s the star here! Pasta of any kind including spaghetti is not going to go well with a nice and moist cupcake, so there had to be another way, and there is. Ladies and gents, I give you the ‘grass nozzle‘. This genius piping tip is responsible for fluffy buttercream teddy bears, football pitch cakes and now… Elf Breakfast Spaghetti cupcakes! There’s nothing difficult or fancy, just pop the piping tip into your piping bag as normal and squeeze through the frosting in one long swirl, and you’ll find that you get long strands of frosting, or as I’d like to call it… frosting spaghetti!

Now syrup frosting can be a little on the sweet side, and that’s why its an Elf’s favourite flavour. But with all that frosting and candy, you really need something to balance them out, and here’s where the cupcake comes in. Rather than going with a standard vanilla cake, which would have worked well, I raided the ingredients pantry for the dark brown sugar, that I remembered to buy after forgetting it for my Baileys cupcakes.

Switching out regular white caster sugar for the soft brown sugar, not only gives the cupcakes a darker colour and a slightly heavier texture but also gives them a caramelly taste that perfectly compliments the syrup frosting and the candy overload on the top. In fact, a touch of ground ginger, nutmeg and cinnamon and you’d be on the way to a gingerbread cupcake. For me, I actually quite like it just as it is.

Get the four food groups into your Elf Breakfast Spaghetti cupcakes

I’ve covered off two of the four Elf food groups in these cupcakes, but there has to be a way to get them all in and really overload your sweet tooth. Or if you didn’t want to come crashing back down to earth after a sugar hit; then you could switch some of the toppings around instead. Let’s take a look…

Don’t forget, if you’ve tried these Elf Breakfast Spaghetti Cupcakes recipe or which of the four Elf food groups is your favourite, I’d love to hear what you thought. Drop me a note in the comments below and a star rating.

Then why not check out these other awesome Christmas dessert recipes… 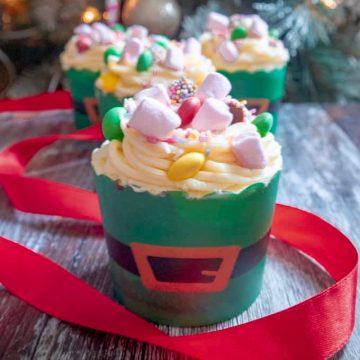 For the Frosting and To Decorate

To Make the Buttercream

The soft dark brown sugar gives the cupcakes a caramelly taste; but if you prefer you could switch for a light brown or white caster sugar. Alternatively, stick with the dark brown sugar and add a little ground ginger, cinnamon and mixed spice for a festive taste.